Born in Quebec City, Marie-Louise Gay studied graphic design and animation in Montreal and, later, illustration in San Francisco. Initially an editorial illustrator, she quickly moved on to illustrating and writing children's books.

For more than twenty years, she has written and/or illustrated some fifty children's books, from hardback books for toddlers to short novels and picture books: Magie d'un jour de pluie, Le cirque de Charlie Chou, Mademoiselle Lune, the Stella series and Sacha et Caramba, to name but a few. Her books have been published in some twenty countries. She is also the author of three plays for young people, including Le jardin de Babel. She also designed the puppets, costumes and sets for her plays.

Marie-Louise Gay lives in Montreal. She gives workshops, readings and lectures on children's literature, illustration and the joy of reading across Canada and the United States. She has won two Canada Council awards (English and French) (1984), the Mr. Christie Award (1997 and 2000), the Ruth Schwartz Award (2000 and 2006), the Governor General's Award (1987 and 2000), the Elisabeth Cleaver Award (2002), the Alvine Bélisle Award (2005) and the Vicky Metcalfe Lifetime Achievement Award (2006), among others. She was nominated for the Hans Christian Andersen Award. 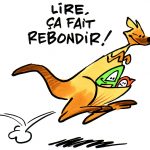